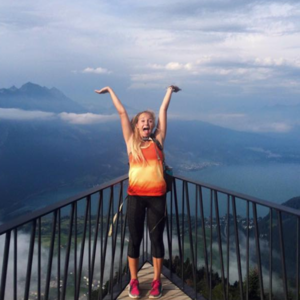 What was your role as a camp director this past summer?

I helped program camp activities which is very compatible with lesson planning.  We planned all sorts of activities from themed parties, to fashion shows, to relay races. My main responsibility was to care for the military kids during the day.  Most military kids need that extra support and attention that they may not be getting at home due to deployment, so being an extra friend and/or caregiver was extremely important.  As a director, I was also responsible for paperwork, accountability and ratio, as well as serving as an extra support system for my fellow day camp counselors as well. The relationships I made with the military kids are some of the most meaningful connections I have ever made, and I miss them every day!

Typically, we would show up for work around 8:15. At 8:30, we would do a Blitz outside, which is Camp Adventure lingo for singing crazy camp songs with our campers. Some kids would then get ready for their field trips while the rest of us would go inside and start our camp activities we had planned for the day.  We had an art room, drama room, game room, gym, chill zone, discovery room, and club room.  Each room would have staff in it, and we would do different activities.  Kids were able to come and go from room to room as they pleased.  We would continue this routine until around 4:00, which was when we did closing. Closing is another Camp Adventure term-- during closing, we sing songs again and share stories about our day. This routine continued Monday through Friday.  After work Friday night, we were free to travel and sight see until Sunday night when we prepared for the following week.

How did you find your internship?

I had heard of Camp Adventure, but I didn't really know what it was until I stumbled upon their display at the Study Abroad Fair. After talking with the students there, I decided it was definitely for me. Camp Adventure provided me with the opportunity to work with kids while traveling the world at such an affordable price-- how can you say no to that?!

How did this internship impact your future career plans?

After working with Camp Adventure the past two summers, I now aspire to teach either on a military base or internationally after I graduate.  I truly want to make an impact on my future students, and I want to change the world and inspire my future students to do so as well.  By teaching on a military base, I feel that I would be provided that opportunity.  Also, after being granted the opportunity to see the world, I have gained such a stronger appreciation for other countries and cultures.  Teaching overseas would allow me to see even more of the world, experience different cultures, and make an impact on students.

What was your favorite memory from your internship?

The memory that impacted me the most was in Italy two summers ago on our last day of work.  The day was so emotional because the kids knew we were leaving, and the relationships we had made with them were unlike any other.  During closing time, we were singing and doing the sign language to "My Wish" by Rascal Flatts.  At this moment, every child and every adult in the room was crying. One little girl who was sobbing uncontrollably asked me why I had to leave because her dad was gone too, and it just wasn't fair. It was in that moment that I realized not only how much of an impact I had truly made on these kids, but also how much of an impact they made on me as well.  I will be forever grateful for Camp Adventure and the memories I have made through this life changing organization.