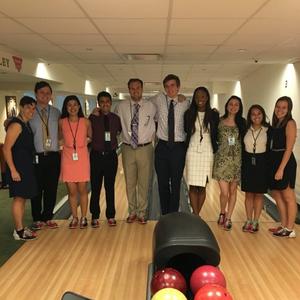 Brendan Buhle had the incredible experience of interning at the White House this past summer in the Office of the Vice President as a Correspondence Intern.

What were you internship responsibilities?

My internship responsibilities changed a lot because I worked on a variety of tasks at the White House. On a simple level, I was on a team in charge of responding to the American people’s questions and concerns. As everyday Americans would write to the Vice President, I would respond to them on his behalf. On other days, I would help fact-check his speeches and work on teams that made sure events like The Cancer Moonshot Summit, The United States of Women Summit and The Singapore State Dinner ran smoothly.

How did you find this internship?

How did this internship impact your future career plans?

Originally, I thought I would have one concern on my mind: how much money would I make? After this internship, my idea of where I wanted to work in the future completely shifted. The work being done in the White House is of the utmost importance. After working on such impactful projects, it is very hard for me to work for a company that doesn’t have as big of an impact on the world. Even now as an ordinary citizen, I wish I could be making more of an impact.

What was your favorite memory from your internship?

My favorite memory was working on the Cancer Moonshot Summit, which was an event organized by the Vice President, which brought the leading doctors and researchers from around the world to work together and help get closer to a cure for cancer. When I listened to The Vice President and fellow doctors’ optimism it changed my perspective on the war on cancer.